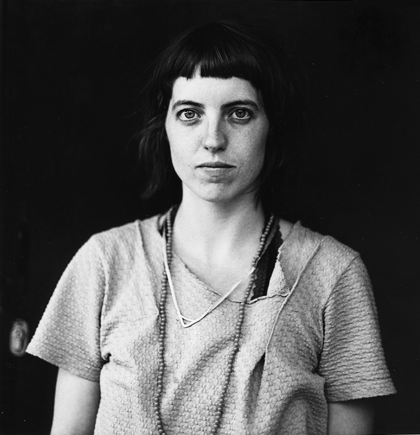 When you first hear the sonorous, atmospheric swell of singer-songwriter Rozi Plain’s home-built electric guitar coupled with her swooning vocal charm, you may as well put your hands up and surrender. You’re going to be won over.

Originally hailing from southern England’s secret garden of Winchester, Rozi moved base up to Bristol to form the Cleaner Collective with her brother Romanhead, and best pal Rachael Dadd. Exchanging demo tapes with Fence Records’ King Creosote and The Pictish Trail at the Green Man Festival, Rozi and her friends soon found themselves entwined in the world of DIY lo-fi folk merchants, the Fence Collective – regularly performing at the label’s legendary Home Game and Away Game events in Scotland, and playing genial host to any Fence performers travelling south.

New album, Joined Sometimes Unjoined, is Rozi’s second LP with Fence Records, following a move to Brixton, and the release of two interim EP’s with Need No Water Records – Humans and See My Boat. Accompanied by a full band this time, her sparse vocal and finger-picked guitar arrangements are fleshed out across ten tracks with a revolving cast of layered voices, soft-tumbling percussion, steel-pan drums, violin, piano and lilting brass. It’s a warm, summer-sun blend of melody centred around Rozi’s voice, and as such the playful jolt of lead-single, ‘Humans’, balances with the heart-breaking solemn vocal of ‘Days Minutes’; equally the carefree birdsong whistle of ‘Eating In Your House’ is matched by the happy-go-lucky yelp of ‘See My Boat’.

The album is being pre-released in limited edition formats from July, with an official general release scheduled for late-September.