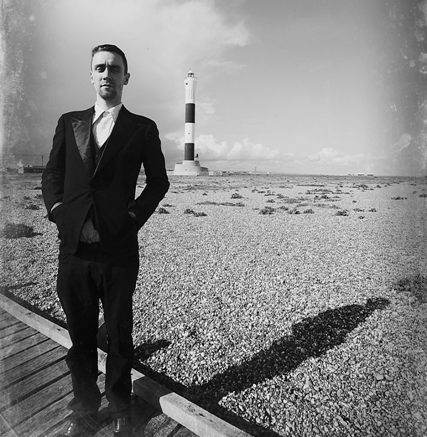 Jack was born in Bath, Somerset, and grew up surrounded by a plethora of eclectic records; Beach Boys, Augustos Pablo, Fairport Convention,Tom Waits, Billie Holiday, Laurie Anderson, Echo & the Bunnymen, Can…. A reserved songwriter but keen bass player from an early age, Jack studied and played music full-time in Liverpool for a number of formative years, developing an unusual finger-picking style on guitar as a result of bass being his first instrument.

Eventually wending his way to London, Jack self-released his debut ‘Allow It To Come On’ a lofi, intimate venture, recorded in the confines of a tiny attic room. It was widely lauded for its brooding, meandering melodies and minimalist production.

“… hugely beguiling….. A talent in urgent need of discovery.” The Sunday Telegraph

“…..works a slow charm over you that’s well worth the wait….simply lie back and take the title literally” gigwise

Building on the nuanced psychedelia of the first, second album ‘Copenhagen’ – recorded in rural Sweden – had more of an intensity and focus, whilst retaining Jack’s signature sensual languor. Recorded as a trio (Jon Scott – drums, Philip Moll – double bass), the production was far more expansive and enhanced by the addition of Djamilla Skogland Voss’s backing vocals.

“…with his breathy Ian McCulloch-style croon…a burnished psychedelia creeps into the mix and takes this music to the skies.” Uncut

“…exquisite melancholy song writing in the finest traditions….mildly psychedelic……the vocals are attractively slurred and sleepy, the lyrics dreamlike and beautiful, and the melodies and arrangements…get right under your skin.” ***** The Sunday Telegraph

Third record, ‘Long Mind Hotel’, was recorded at Sawmills Studios Cornwall. Situated up a tidal estuary, reached only by boat at high tide, it is Jack’s first studio album. The sessions spanned five days & nights last June, during a particularly cold ‘summer’ patch when it rained non-stop. Secretly glad for these conditions, Jack felt they complimented the record – you can even hear the remnants of a storm on ‘Revolving Doors’.

‘Long Mind Hotel’ also marks a decidedly stylistic change, due in no small part to all the other players being primarily jazz musicians:

The album owes a lot to their immense musicality.It is littered with improvised interludes, never indulgent, each song simultaneously and deliberately structured and arranged.

There is an intensity to the work, possibly born of time constraints and tensions which arose, mainly around which takes to use (each one tended to differ). It lends the album great focus.

In many ways it is a ‘coming of age, a taking stock of life’s predicaments, limitations and neuroses’ album, taking in anaesthesia & a hospital stay ‘Postcard from Sedation’, unravelling the indulgences of drug taking ‘Long Mind Hotel’, social alienation ‘Into The Void’, aspiring to optimism ‘Heavenly Bodies’ and being in love ‘Moving In A Straight Line’.